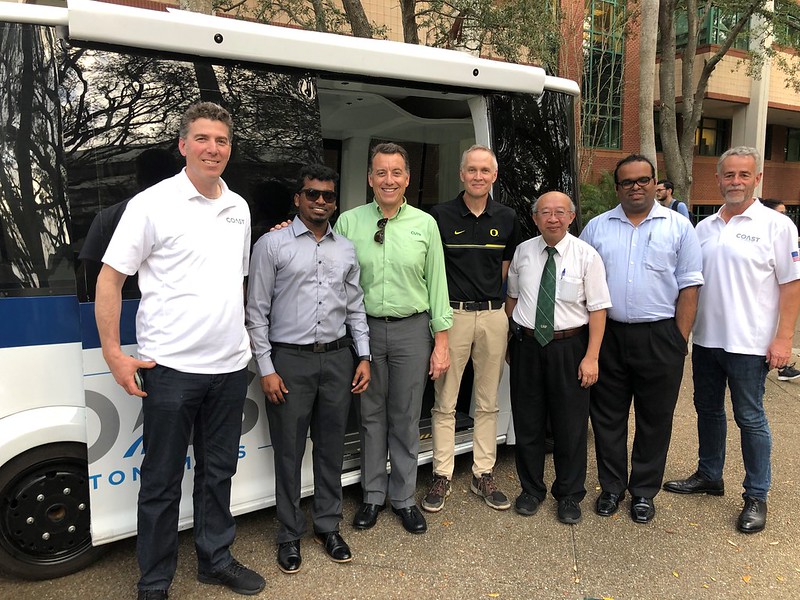 Public transit systems that include transit bus and shuttle service have been advocated for reducing traffic congestion, fuel consumption, emissions, traffic crash risk, personal vehicle use, and overall associated loss of productivity. At most mid-size and large open-campus universities with many campus activities, a courtesy shuttle or bus service is an important mode of transportation around campus and in nearby vicinities. Given that on-campus traffic conditions, traffic congestion between classes, the nature of short-distance trips within or around the campus, and the difficulty of finding parking spaces, automated shuttle services have been recognized as a promising solution to alleviate these problems.

Automated shuttle/bus systems have been designed or are under development by peer high-tech companies (i.e., EasyMile, NAVYA, Meridian) to cover short distances and predefined routes in multi-use environments. The innovative automated shuttle/bus systems currently on the market are capable of navigation, path planning and control, obstacle detection, or/and crash avoidance and have been successfully showcased in multiple scenarios. They can be further enhanced and equipped to communicate with other vehicles and infrastructure to exchange traffic and travel-related information and make travel safety and efficient. The University of South Florida (USF) is a major university with approximately 50,000 students enrolled. USF’s Bull Runner bus service has an annual ridership of more than 1.3 million around the Tampa campus and nearby vicinities.

This vision could lead the USF Tampa campus to become one of the major campus automated vehicle testbeds in the US, and the campus automated shuttle service demonstration could begin this vision. Most of the investment in and testing of autonomous shuttles in the past were in Europe. Two recent autonomous shuttle projects were conducted on college campuses—one at the Swiss Federal Institute of Technology in Lausanne in 2015 and one second at Wageningen University in the Netherlands in 2016. In the past couple of years, the demonstration or testing of autonomous shuttles has begun to draw attentions in the US.

Riding into the Future