This research examines the linguistic choices that frame relationships between bicyclists and other parties involved in fatal crash events. Textual data were collected from media reports of all bicyclist traffic fatalities that occurred from January 2009 through June 2018 in Hillsborough County, Florida, which has a disproportionately high number of bicyclist deaths compared with other areas of the U.S. The media reports were coded with a qualitative data analysis software and analyzed using critical discourse analysis (CDA), a rigorous qualitative method used to analyze oral and written communication developed by Fairclough. Through CDA, the study examines how linguistic choices produce meaning and reinforce the “common sense” or “taken-for-granted” lexicon of transportation. Results show the majority of news reports were episodic rather than thematic, focusing on the traffic event and the parties involved in the crash, particularly the bicyclist. Vocabulary, grammatical structure, and narrative framing of news reports largely functioned to remove blame from the motorist and to highlight the bicyclist’s actions. These linguistic strategies reflect the assumption that responsibility for safety rests on the bicyclist and detracts attention from potential social policy reform that would lead to fewer bicyclist fatalities. A minority of articles written with thematic frames focused on broader issues such as social capital, safety education, and advocacy. This interdisciplinary study is a unique contribution to transportation literature, employing a methodology typically reserved for communication scholars and linguists. 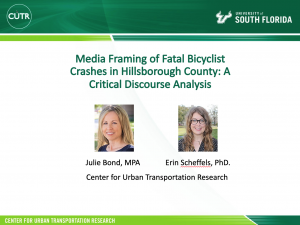