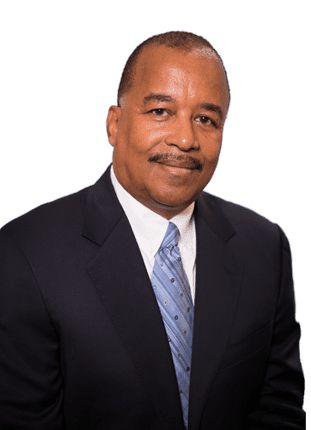 Thornton J. Williams received his Bachelor of Science Degree in Physics from Florida Agricultural & Mechanical University in 1977, and his Juris Doctorate from Florida State University in 1981.  While attending Florida State University Law School, he was the president of the Black American Law Student Association (BALSA) and was awarded Best Team in the Southern Regional Frederick Douglass Moot Court Competition and interned with Florida Supreme Court Justice Joe Boyd.

Thornton is the managing partner of Williams Law Group, P.A.  He has practiced private sector and governmental and administrative law for over 30 years.  Thornton practices in the areas of construction litigation, contract review, transportation and governmental law.  He has routinely provided comprehensive legal services for major projects.

Thornton has had an extensive legal career in Florida’s government, beginning in 1982 as an Assistant State Attorney prosecuting criminal cases in the Felony Division of the Second Judicial Circuit.  He has served as an Assistant General Counsel to Governor Bob Graham and as a Staff Attorney and Deputy General Counsel for the Department of Business Regulation, and has also served on Governor Jeb Bush’s Transition Team.  Thornton left the Department of Business Regulation in 1990 to become General Counsel for the Florida Department of Transportation (FDOT), serving in that capacity until 1996.

In over six years with the FDOT, Thornton actively participated in policy deliberations, contract negotiations and high profile litigation.  Thornton was also responsible for the cost recovery areas for FDOT.  Between 1990- 1996, FDOT was exposed to approximately $10 – 20 million per year but paid out only approximately 10% in claims each year.

He provided technical legal advice on all legislation for the FDOT.  In addition to lobbying the transportation committees, he was also the lead lobbyist on all claims bills before the Legislature.  In 1996, he was recognized by the Chair of the Senate Judiciary Committee for his involvement in the settlement of the largest claim bill in the history of the state of Florida for $21 million for FDOT, which had an exposure of over 90 million dollars.

He left the Department of Transportation and joined the firm of Rumberger, Kirk & Caldwell as a Partner.  After working there for approximately two years, he formed the firm of Thornton Williams and Associates on August 1, 1998. The firm became Williams Law Group, P.A. on August 1, 2012.

Thornton is considered one of the top transportation lawyers in the state of Florida.  He was the lead attorney on the installation of  SunPass, the Miami Intermodal Center and the I-595 Express, as well as many other transportation-related projects.  He presently represents the MPO for the Leon County area, the Capital Region Transportation Planning Agency (CRTPA) as well as other entities with transportation interest.

Thornton and his wife, Harriet, live in Tallahassee, Florida.