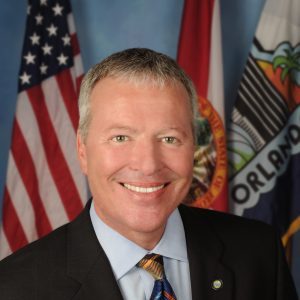 Buddy Dyer was elected Mayor of Orlando in 2003 and has worked tirelessly to advance the community’s shared vision for Orlando as America’s 21st Century City. A successful attorney in private practice, he was first elected to public office in 1992, serving Orlando in the Florida Senate for 10 years and being reelected twice. During that time, his colleagues recognized his outstanding leadership skills and elected him as their Senate Democratic Leader, a position he held for three years. Prior to his public service, he worked as an environmental engineer and practiced law. He earned a bachelor’s degree in Civil Engineering from Brown University and a Juris Doctor degree from the University of Florida, where he was Editor-In-Chief of the University of Florida Law Review and a member of Florida Blue Key.